So you want to be a model? Part II

Hallo Freundes!
(No, I don’t know a lick of Deutsch, so don’t respond to me in German haha)

We’ve discussed the things you need to be a successful model;

And you are familiar with body types:

Apple: Broad shoulders when compared to narrow hips.
Bannaa: Little to no curves, comparable to a ruler
Pear: Hips are larger in measurement, to waist (More butt than breasts)
Hourglass: Marilyn Monroe…need I say more?

And of course, the different genres:

Now that you know the above info, lets spend a few minutes touching over them to help you get a better understanding. We’ll also talk about the next steps.

Each genre of modeling has its limitations and recommendations.

Editorial modeling is your magazine work. There are two types of magazine work; Glamour and Fashion. Glamour magazines are a lot more forgiving. To get into glamour magazines (and modeling) you should be curvy. Maxim magazine, FHM(now limited to over seas models), Stuff, CO-ED, Blender and others are prime examples. For the most part, those magazines only publish A and B actors and actress’ but there are backdoors in. For example, every year, Maxim holds their “Hometown Hotties” contest and it’s open to everyone across the US. However, the thing to note is that your photographer is taking the short end of this. They will take your photos and for the better part of the year, use them to generate hits to their web page. The other mags mentioned are now mostly online e-zines. E-zines are quickly becoming the best way at getting published as with the economy, many magazines can’t afford the cost of being online, so they move to a web presence.

Editorial Fashion is your magazine work that involves the more main stream magazines such as Glamour, Elle, and so on. To get into these magazines, the rules are almost the same as glamour magazines; you have to be an A or B list star. The difference is the ads. The ad’s help to make the major fashion mags as it shows the viewer the newest fashion trends. To get into those spreads you have to be signed with a major agency. You will need to stand 5’8″ flat footed. We will discuss this more in a second.

Runway modeling is often viewed as the Holy Grail of modeling. It’s one of the more misunderstood genres because of it’s status. To walk on the runway, a female model should typically be around 5’9″ tall and slim. Runway modeling gets the most negative associations due to the dramatic deaths of runway models Luisel Ramos, Eliana Ramos and Ana Carolina Reston. While each young lady’s death was tragic, it brought to light one of the many underground things relating to modeling, malnutrition. In fact, Luisel Ramos died due to heart attack as a direct result of anorexia. The whispers of models eating tic-tacs and water are very true. Runway modeling is a very aggressive business, it’s very cut throat and not to be taken lightly.

Swimwear/Lingerie: This is considered glamour modeling and if you work hard, can be one of the better paying jobs. This is mostly because you can determine your worth based off your work. For this genre, you should be 18-30 and proportioned. It is the more body forgiving of all the genres as you are expected to be curvy. This style is broken down into your Maxim, FHM, CO-ED and magazines such as that. You will most often work with out an agent or agency-which is good because no one is keeping a percentage of your profit, but it requires you to do a large amount of networking and putting yourself out there. You will need to be 100% comfortable with your body, or at least able to fake it. This and nude is the norm for most younger models 18-24 for the simple fact your body is at its peak during these years.

Nude: The black sheep. Everyone enjoys looking at nudes, but few are able to admit it! Nude modeling whither it be glamour, artistic or for college/art class is the easiest of genres to get into. Right off the bat it can yield paying jobs to the inexperienced model. A sub-divison of that modeling is Implied or “Maxim style”. The reason why it’s easy and most lucrative off the bat is there will always be new photographers that are looking to shoot nudes. Believe it or not, nude photography is almost as difficult as nude modeling. To do a proper nude shoot, you need more than just a model and photographer, you need vision and competency with both parties.

Boutique: There is a new genre of modeling and it’s boutique modeling. Boutique modeling is for models that are shorter than the national “standard” and they get into legitimate agencies via getting publications and making a name for themselves. Usually, the boutique model isn’t known outside of their local state as most legit agencies won’t try and submit a 5’4″ model to national campagines.

Now that you know the genres and body types, you have to decide which type of model you want to be. Again, you need to be realistic with everything. You need to have thick skin and be open to shooting things that is a reach for you. Many models want to shoot Fashion, but you may be better suited for a hands model or foot model or smile/mouth model. Be open and receptive and use that as your way in. Or another analogy; Kordell Stewart was a famous football player. In college, he was a wide receiver, when he was drafted into the NFL, it was for what he really wanted, a quarterback. He used the wide receiver to get the quarterback job.

You have your styles, you now need make your next step. One of the first things you should do is register a DBA (Doing Business As) or LLC. By registering your own business, you are able to write off things. If you are going to seriously persue modeling, you should dedicate time to learning how to do it. There are LEGIT learning opportunities out there and they are NOT associated with the John Robert Powers and other “schools” like it. You will be able to write off things such as developing your portfolio.

The next step is very important; choosing a photographer. There are many photographers out there to choose from, you have to find one that not only fits your “style” but is knowledgeable about modeling in general. It’s one thing to be able to take a pretty photo, something totally different to know how best to guide a model in her career. Because anyone can purchase a dslr camera and lens and call themselves a pro, it makes it difficult for the model to know the difference. Your photographer should know which genres your best suited for. Your photographer should be able demonstrate image quality that rivals what you see in magazines. This doesn’t mean an artistic photographer should be passed over, it means you should develop your portfolio first, then get creative. Let’s face it, everyone loves themselves and everyone loves photos of themselves. This doesn’t mean the photos will be good.

What you will need is a comp card. A comp card, also known as a ZED card is a model’s business card. This card will have several photos as well as your stats. The photos should be representative of the styles you want. It should be one clear head shot and about four other photos. It should list your name and vital stats. This is the card you hand out to people that have jobs in the model industry. They should be professionally printed on matte paper as well as digital copies kept to send out digitally.

This is where choosing your photographer becomes important. If you choose someone that doesn’t know what they’re doing, you will end up with an unusable comp card. Please note, you may have to PAY your photographer to develop your portfolio. You pay photographers for several reasons;

Their experience
Their guidance
Their quality

A good photographer will be able to guide you with their experience and their quality will open doors. They will be able to offer you inside info that no one else can. Be wary of the fauxtographers that try and recruit you for worthless things such as bikini contests, calendars and other shams. If you are serious about modeling, this is NOT the best way to go about it as you’ll not get anything in return. Your photographer should be more into your career, than you are at first, if they just want to shoot you and move on to the next, they are nothing better than a used car salesman and someone you should avoid.

You now have your comp card, your photographer mentor, what do you need to do next?

That of course is part III of this series. Stay tuned! 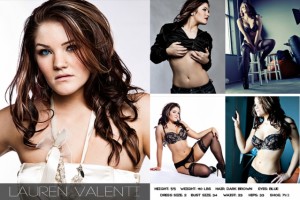