Often when talking to other photographers, they say to me “How do you shoot the sexy stuff?” When I ask them to expound on the sexy stuff, they typically mean the nude or implied nude stuff.

This is when I get to hop up on my soap box and tell them;

“Sexy is defined by the client, not me”

Not understanding what I mean, I quickly and before my soapbox melts, explain to them that what makes my images sexy isn’t that the client is half or full nude, it’s the fact that it’s the clients idea! You’ve heard me speak about connecting with clients so I’ll save you that speech, but part of connecting is LISTENING to them andHEARING what they are asking you. Once they realize you are listening to them and because you’re being an effective listener, they know that they can say what they really want and you’ll understand and provide them with what they need. Example? thought you’d never ask.

On a shoot, I once had a client tell me that she would NOT shoot topless. Right away I knew she wanted to, but in accordance with her wishes, I told her I was quite ok with that. That my job is to capture her at her most comfortable and no nudity was fine with me. After our first set was done, she started to say “I saw a photo, I think you took it was of a pretty blonde and she had blue jeans and nothing else. She was bent at the knee…” I brought out my IPad and had to navigate to my nude folder and at that point it was the perfect opportunity for her to look at more nudes and really get warmed up to the idea of shootign nudes. I left it at that and she got to a few photos and said “I wish I could shoot something like this, I love it!” I asked her why couldn’t she and she said “Cause…I don’t know!” As the shoot progressed we talked a bit more about it but I made sure to steer clear and let her bring it up. Finally toward the end of the session I said “I think you should shoot some like it. I think you’d have fun” She agreed and we shot something like it.

Why is it sexy? Because she pushed herself and came out of her shell. There are MANY photographers who “talk models out of their clothes” I am not one of them. If I have an idea, I throw it at the model and if she declines, I’m over it. The reason why it’s sexy is because she trusts me to get the shot and make her look on film, the way she does in her head. Because she’s handing over that trust, it conveys in the photo and we get to see it as the end result.

Here’s a photo of Carly. Carly was one of those who pushed herself a bit. She wanted to shoot up to lingerie. I loved her body style (who doesn’t love gymnasts?) and suggested she keep the shirt but lose the bra. She agreed and as a result, we got some great images. Now when you compare these to some of the other images I have, these are “tame” but what makes it sexy is knowing she dug deep and got the image because she pushed herself. 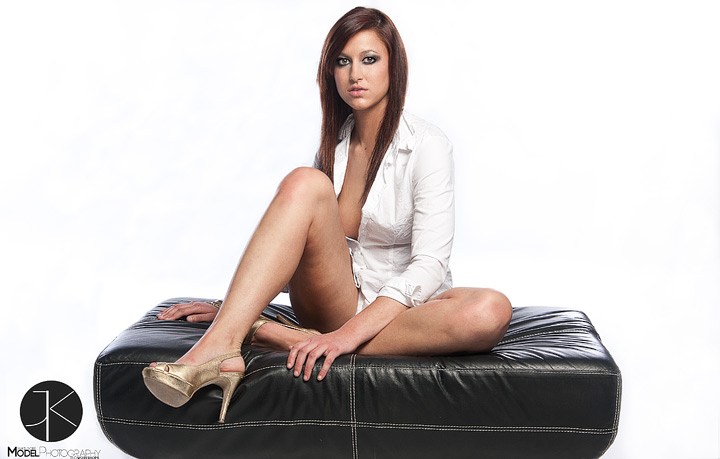