Been a while, eh? Sorry about that! As you know, I’ve been preparing my move to Los Angeles so that has been taking up a LOT of my time. I want to talk about paying gigs and the ignorance surrounding them, as well as my feelings on CO.

Initially, I was going to use this blog post as a blame and shame, my one and only response to all the “photographers” and “models” who have taken plenty of moments of their time to bash me. For 5 years I’ve never said anything negative about them, I wanted to use this blog post to point them out. Then I thought; “Who gives a crap? I’ve ignored them and have done 100 times the work and things they’ve done, why use MY blog to bash them?” So I won’t. But what I will touch on is two things people say to me, or about me:

1. Why do you hate Colorado so much now?

Number one has everything to do with number two and vice-versa. 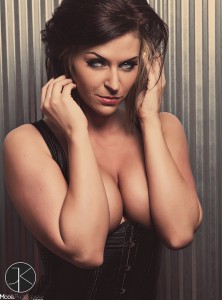 The gorgeous and lovely Janelle of Denver, CO

For the record: I do NOT hate Colorado. Not at all! I love it out here! I love most of the people, the mountains, the…everything about it! What I dislike is the direction this state has taken with regards to it’s limited, yet thriving photography industry. Let me be brutally honest: Colorado is a hobbyist state. There is no real work here. Some Coloradians will no doubt become upset, but it’s fact. Comments such as that, is what makes people think I’m anti Colorado, but in fact, I’m anti-lying. Part of my marketing was “The most nationally published and sponsored model photographer in CO.” which is very true. I have a lot of publications and a lot of sponsors.
Around 2012 I dropped that marketing piece because I was basically advertising: “The the most noted photographer in a state that my own industry cares nothing about”. Who wants to be king of an inconsequential hill? Not me.  I decided that in order for me to reach my goals, I need to be where my goals are, Los Angeles. I am not getting any younger, yet while in CO I was holding on to my dreams. It dawned on me that I need to go where my dreams are going to best be made: Glamour Capital Los Angeles.  Here in CO, there is only ONE LEGITIMATE Modeling Agency, Donna Baldwin of which I spoke with a few years back. I had contacted them to secure a model for a workshop. Brad offered to send me a model who had no experience, but charged 800.00 for the day. Now I don’t blame DBA for trying to stiff me and get money, but sadly, this boy has toured the U.S. shooting with quality models for quality clients and he knows when he’s being scammed.  A quick look at their FB page will show you that 98% of their work is local. About 10 years ago I contacted DBA to get their feedback on the CO industry to include in a model seminar I was teaching. One of the things 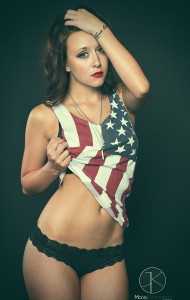 The beautiful Kaitlyn and her ‘MURICA shirt

Brad said to me was that DBA would never engage in promo modeling because it’s not real modeling, that it was beneath them. Further proof that CO has no real market, that’s pretty much all they hire now. Cute chicks in skimpy outfits to hand out shots at bars. I’m not knocking the work, just trying to explain my point using references.

never met the guy, much less know his work. I did spend some time looking at his work and his two cronies. One of my biggest haters lives about 45 minutes south of me. I did meet him when I first moved to CO and thought his ego was almost as big as his actual head. Almost. His pink images and over-exposed images for sure garners no one work and like his two flunkies, they all need to get better at photography and worry less about me. While we’re on the subject, what baffles me most is why they would say I shoot porn to try and detract people. When I shoot, I get paid. Are they saying they won’t get paid to shoot because it’s one genre? This attitude is why CO is a hobbiest state. I shoot glamour. Why? because I’m good at it. Do I feel this way? No, not at all. My publications and sponsors and 7-15 emails asking to work with me says this. If these guys were good, they would be able to secure paying work and not worry about someone who is more established.

Colorado has taught me a lot, all of which I am thankful for. I feel it would be worth my time more to be gossiped about by people of substance which is why I’m moving to CA. Colorado has taught me a lot, but a paying gig is a paying gig. I will take it if it’s a family portrait session, high school senior session or playboy, glamour model magazine or even penthouse nude submission! I get paid to do what I do, not listen to people who have nothing better to do than gossip and be jealous.