In our profession, the one thing we must make certain we have is a model release. A model release isn’t needed but it is depending what you want to do with the photos you’ve taken. There are many pros and cons to having a release and how you benefit is totally up to you. One of the biggest issues with having a release is having the proper release for the proper session. For my paying clients I have two separate releases; one for them and a commercial usage for me. On my TF shoots, I have one main release that gives me rights to everything. 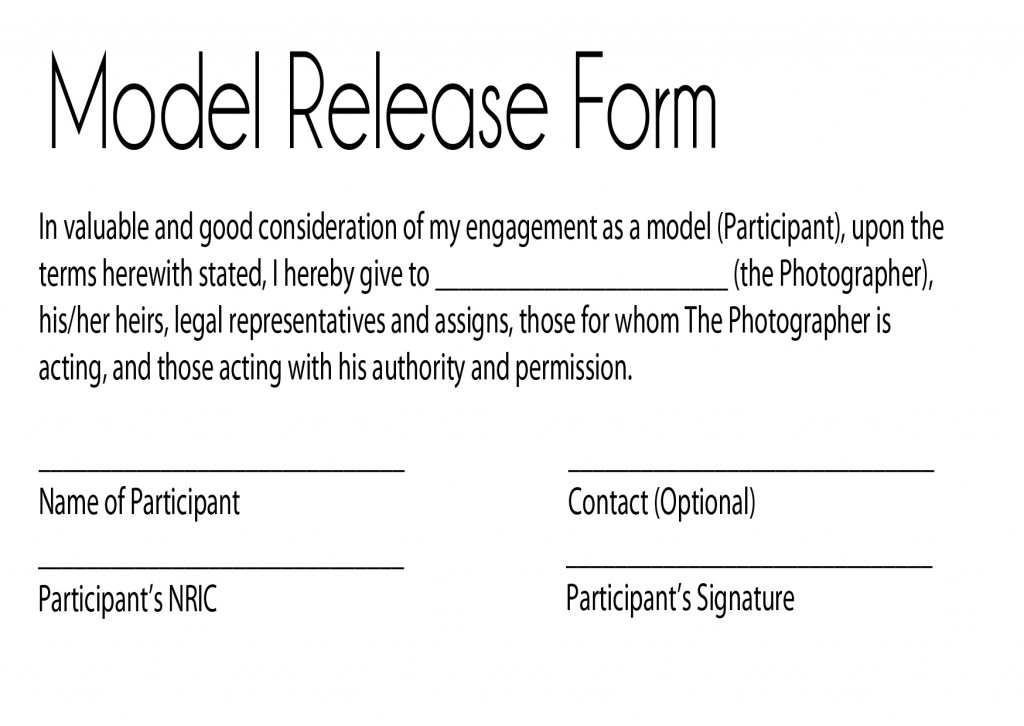 My paying clients have a lot more say as far as when, what and where their images can and will be used. Although improper, I used to view this as a an “honor” thing for them. After some time I realized it’s their dime, their dollar. They ultimately have the final say. I have two releases:

The general release is releasing me from any legal liability that as a result of any damage to their personal property, persons or anything that wasn’t 100% the same when they got there. It also lays out the purpose of the shoot, the presentation segment: How many photos will be displayed, my pricing  and a-la carte things. It states how long the turn around time is and any payment arrangements they setup. They must sign each of the three papers before I make a motion to my camera.

Commercial usage is always the fun one. It’s the usage agreement that allows me to use the images on facebook, twitter, all social media and my various other marketing sites. At this point, it becomes the juggling act of how to get what I want, while giving them what they want. What I want is the ability to use the images to show off what I can and did do. In case you live under a rock, the more photos you post, the more clients you will attract. What I will do is make it so the client has no choice but to allow me to use the images. How so? By giving them a discount on their product. For example, for me an 8×10 print costs 75.00. If I want to use their images on my social media or websites, I will knock the price of every 8×10 down to 55.00. If they are still insistent that I can’t use their image and it’s a really, really good one, I will pony up a larger print on me.

On my Trade for CD shoots or TF* shoots, those are entirely different. Those shoots I own 100% of the photos and can and usually do, anything I want with them. I make it very clear to them up front. Majority of the sessions aren’t a big deal, some are.  Usually, it’s the wannabe models that it becomes an issue for. For a long time I thought I was the only one that had problems with these people. I came to find out I’m far from alone. In general convo I’ve had lots of photographer friends tell me that they set the expectation and everyone signs off on it, then the model has what I call “buyers remorse” and changes her mind. With out the model realizing a lot of work and time (money) burned in doing this, most photographers aren’t going to just say ok when asked or threatened to remove work. Lots of photographers have teams of people that put in work and they’re not ok with having to remove.

It is always best to have a release for every occasion imaginable. It’s best to have the release reviewed, rewritten and approved by a business lawyer to make sure everything is legal and legit. It is also best to make sure you have a release signed by EVERYONE you work with, paid or free session. Most time you don’t need a release to take photos of someone or something, but you will need a release to display the images publicly or risk being exposed to various litigation. For me, before one frame is taken, the release is signed and a copy of their photo id is captured. When it comes to shooting I’m verbose, however, when it’s time for them to review the release, I often step out of the room and wait for their verbal que that they either have read, or have questions. I also record the process for both their and my protection.

Do you use releases?