Last week I posted for Old School Friday and the model was Layla. I said at that time I would do a Meet the Models on her and here we are.

I honestly don’t remember where Layla and I met up, I do know it was online. The first shoot that we had scheduled, she flaked out on. This was 2005 and I was at the beginning stages of not only getting better, but having publications behind me which meant the industry was starting to find validity to what I was doing. At that point, I felt everyone owed me because I was beginning to be noticed and those who flaked felt my wrath. Believe it or not, when she flaked, I wrote her a nasty email and told her I would never use her again for anything and that she was a flake. I realize today, this was my own insecurities aka ego shining through, but at that time, I was beyond serious. She wrote me back and apologized for flaking and said if I set up another session she would be there. I was still new to Colorado so I agreed to give her one last chance. This chance, turned out my having my first Muse.

She showed up on a Saturday afternoon having come straight over from work. She had told me she didn’t put make up on and didn’t bring any. I figured it was another excuse for not showing up and told her it was fine, she didn’t need any, that this was a test shoot to see if she would show up and for us to get to know each other, photog and model. I knew she wasn’t going to show up right up until she knocked on the door. I lived in an apartment building and had my fair share of people knocking on the door expecting someone else to still live there. When I opened the door, she was there with several bags and a big smile. She walked in and we got to know each other a bit then started going through clothes to shoot in.  Now prior to the shoot she had stated she wouldn’t shoot topless or nude which was fine with me. The first outfit she had was a jean skirt and see through lace top. I was beyond dumbfounded as I could clearly see her body but shot anyway. I’ve of course come to learn that as long as clothing is on, even if totally visible, it’s still not nude. Ya, figure that one. 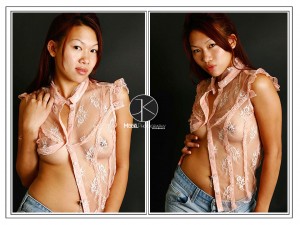 After the shoot we had agreed we both had a great time shooting and that we should do it again soon. I showed her the sample images and she loved them, so much that we set up the next shoot a few weeks later. The second shoot was even more fun than the first and although we were shooting in a small bedroom, we got good images for the time. She was much more relaxed and our entire shoot was spent laughing and having fun. 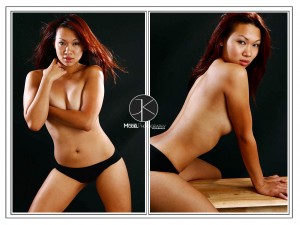 We had one more quick shoot that wasn’t really anything major, just having fun. After that, she wanted to be a model at one of my workshops. Up till this time, it had always been just her and I at a shoot and she never had to “compete” for my attention. It was here that I realized she didn’t like not being the center of attention. Understand she was still cool with everything, but had a bit of a pout to her which I thought was cute. By this time she had cemented herself as my Muse, even if I didn’t realize it at the time.

I had bounced shoot ideas and poses off her and we got good for then images. However, after the workshop her and I spoke less. She drifted away, ended up going to school in Boulder and used the 25 minute drive as a reason for us not shooting. A few months had gone by and I had decided that I wanted to give a “serious” shot at general portrait photography. She had a sister that was a High School Junior and needed photos. I needed a “Senior Model” so the match was perfect. She came in to be the chaperon to her sister but ended up shooting while her sister was changing. I had just got a new ring flash light and wanted to try it out so it worked out perfectly. 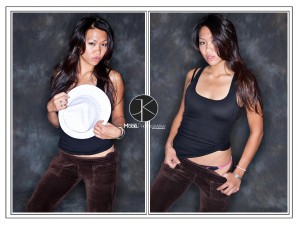