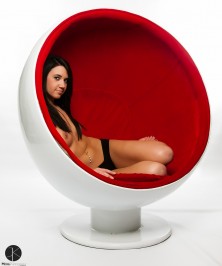 I had met Kendra Cooper online at Myspace, actually! This was way back in October of 2008. We had spoken for a few weeks about a possible shoot. I was still new to Colorado and was setting up shoots with anyone who was interested. This was in an effort to build my brand and still something I do and suggest to people.  We had started to nail down our actual shoot and had planned for my birthday, 11/23/2008. Kendra had wanted to get some sexy images of her and her bff. To be totally honest, I had forgotten all about the shoot and was shooting with an associate and a model he brought to my studio. The associate found her online as well and she had promised to shoot some topless. We were shooting away and there was an entry to my studio. I went out front to see who it was and found Kendra and her friend. I had told them to have a seat and went back to advise my associate that it was time to wrap up the shoot. I went out to talk to Kendra and  a few minutes and came back and my associate was firing off topless images of the model so fast that I thought my strobes were going to burn out. I abruptly ended that session so I can start on mine and started to work with Kendra and her friend.

After the shoot the girls were jazzed and I was happy with the images. I got home and celebrated birthday and went back to work after the weekend. I resumed speaking with Kendra and everything was great. She made a comment about her boyfriend liking them but not liking that I took them. I made a reference to the fact I wasn’t shooting for him but for her and she became bitter. We ended up getting into a heated debate with my telling her that she shouldn’t base her happiness off of a boyfriend at 20 years of age. That if they broke up, she will regret everything she loses at the choice of him. She became angry and blocked me.

The trail goes dead until December 2011. By then I have graduated to Facebook. Kendra adds me on facebook and soon we start to talk. She mentions the ex-boyfriend and drama and how shes not with that guy anymore and he was a prick. She mentions a new shoot and how she wants to do one. For old time sake and I agree. We meet and shoot 12/20/2011.

By this time we had continued to talk and have fun. We had agreed to shoot again and wanted to turn the heat up. Returning to our previous talks of topless and glamour, Kendra decided she wanted to shoot some topless so we did.

After the shoot I ended up moving to MN for a few months to take care of some things. I had gone back in July and Kendra reached out to me asking if I wanted to shoot her and a friend. Thinking it was Staci I said sure. Kendra told me Staci had gotten pregnant and was a bit heavier than when we shot last time and she wasn’t interested in having her at the shoot, but that her friend was way hotter. I will never turn down a hot friend shoot! So I agreed but as scheduling happened, I couldn’t shoot her. I needed to have things planned since I was shooting a lot of people on my short time visiting and she didn’t confirm until day of. Sad at the missed opportunity, we fell out of contact again. I was contacted just a short few weeks ago by Kendra telling me one of her clients saw a photo of her on a authors book. She incorrectly assumed I had allowed usage, then once she found out I didn’t wanted me to drop everything I was doing to get it taken down. Unable to assist her as my life continued over the past four years, she offered to purchase ownership. I’ve done that a few times and never felt good about it. I agreed due to her reasoning and she still tried to make me out to be the bad guy. Right away she made it apparent that she wasn’t going to buy them but wanted to have me move to remove links. The plan fell through and I’ve not spoken to her sense. While Kendra isn’t a “model” she is someone I shot over a few years so she’s a model for my tenses and purposes. I don’t expect to hear from Kendra or Staci any time soon so wish them nothing but success and happiness!