I remember the day clearly!

It was April 13th 2008 and I was getting ready to shoot Genna. I was referred her by a mutual friend named Tony. Tony had worked with her at another workshop and wanted her to be a model at my workshop/s. I reached out to her and set up a test shoot. It was late in the evening as she lived about 30 minutes away and was always either at work or at school. When she showed up (late, but ok) she had a spark to her that was the direct result of youthfulness. She was hot and she knew it, but not in a bad way. She was confident with her body and looks and that showed through in everything she did. As with every shoot I do, I take a few minutes to get to know the model and find out what s/he wants from me, the industry and life. She appeared to be doing it because it was fun and she wanted to see where it took her. We shot and laughed and had a good time all through out the shoot. This was one of the first sessions with my 40D and it held up perfectly!

After the shoot I had decided on the spot she would be a great workshop model and decided to move forward with her as the model. I set up the workshop but due to timing issues on both our parts, the workshop never happened. All the while, her and I kept in contact and we laughed and joked a lot. While we didn’t have a workshop, we agreed to shoot just for the fun of it. Around that time a webmaster contacted me and told me if I knew of any girls that were interested in their own solo model site let him know and he’d set everything up. Coming from the Adult world I have/had lots of connections so I kept that in the back of my mind. One day when we were talking, she said she was having financial hardships so I suggested she get in touch with the webmaster. She was open to the ideal of shooting nude and was doing it at local workshops not making money and not getting decent images for her time, I figured it would be a good match. She agreed that it would be and contacted the webmaster. They worked out an agreement and we set up a few shoots. While shooting we really got to know each other and I thought she was even more awesome than when we first started shooting.

I spoke to the webmaster, he hired me to shoot her and that’s what I did. One day I get a call from Genna that says she wants the site down and down NOW. I had no idea what she was talking about but immediately called the webmaster to inform him. The webby said no under no circumstances will the site come down as he had put 3k into making it and getting it going. Genna was very demanding. I asked her why and she informed me that she told her best friend she had a site and her best friend told everyone including her Aunt and others. After going back and fourth with the webmaster, he was resolved to NOT move the site and nothing at all as far as negotiating. Being I had gotten to know Genna I felt for her and wanted to help. I got the amount of money that was owed (A little over 3,200.00) and paid for the site to come down. After getting the site down I informed her it was down and she said “it better be” I was floored! I paid for her site to come down out of my own pocket and this is what she’d say? I hadn’t shot with her or heard from her in some time. I was shooting with another young lady and she told me we had some mutual friends in common. She described Genna and said she was saying bad things about me. I’m used to this, people say bad things about me all the time only most of them don’t know me, but here Genna was. Around this same time I did an End of the Year workshop at a studio in Local Denver and ended up getting into a disagreement with the “photographer”. After that, he went on a smear campagine and I laughed it off. He contacted models I had out and local models in an effort to tell them I was a bad person. One of those models even showed me the email he sent her. Being offended that I had paid cash money-and a lot of it-to bail her out, I contacted Genna and told her she was acting like a child. No one made her do anything she didn’t want to do and that she could mar my name, it brings me more clients. About a week later she contacted me and told me I was right, that I did get her site down pretty quickly and that I never did anything negative towards her. That she was being immature about it and was sorry. I wasn’t worried about who was right or wrong, but more worried that someone that I thought I was cool with, was bashing me behind my back.  We spoke a bit more and she ended up doing a copy and paste of what the “photographer” sent her; “Genna, I have a model who is looking for a reference on Jay Kilgore. I’m wondering if you could take a minute and tell her your experiences” Genna’s response “Hey _ _ _ sure! I can give Jay a good reference. He and I spoke a bit ago and he said I was acting like a child. He did work to get the site down so I can give him a good reference” She never got a response from him.

After that time I had talked to her and we moved it to text. We agreed to have her out as my workshop model so we got everything set up. Genna showed up and still looked great!  By this time in her venture she wasn’t interested in shooting nudes anymore. There are very few people out there that can go from nudes to non nude and still hold my interest, Genna was one. There was so many things we could do with her shooting nude that we can’t do being non nude. She would have been a great workshop model and we had great rapport, so I said what the hell? The first workshop she showed up and everyone fell in love with her! It was an outdoor shoot and it was about 40 degrees but she worked it. It had warmed up later in the day and she walked over to the car dealership in her bikini and asked the dealership owner if we could shoot on his car. He was unable to make it up to her eyes but quickly brought a car of her choice over for us to shoot on.

Soon after that I had gotten contacted by Ultimate MMA and they wanted models submitted. I contacted Genna to see if she would be interested and she was more than interested! The first and only national magazine publication of her career and she didn’t hesitate at the opportunity 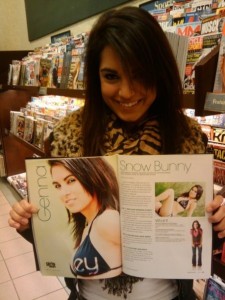 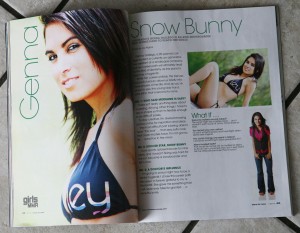 Around that same time I got sponsored by a major strobe company and they wanted me to send them images. I had Genna in for a super quick shot and shot these few images. 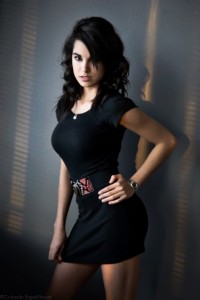 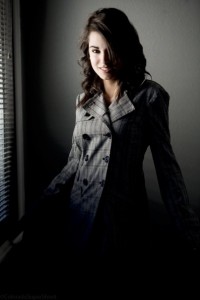 After the above shoot was over, Genna and I spoke often off and on. After this session Genna and I never shot again. We didn’t end on bad terms, she seemed to veer off from modeling and I veered off from using her. Over the years her and I spoke off and on regarding shooting but it never worked out. 2011 she was working at the local Hooters and I stopped in to see her. She wasn’t working and I never had a chance to go back in. Genna and I are in my opinion, on good terms. It’s been several years since I’ve seen her but if she were to contact me and want to shoot, I’d for sure accept! Until then, check out more photos and videos of her on my portfolio site!