Back in early 2010 I was shooting hard and heavy in Denver, CO. I had just moved into my own studio and was shooting away. I had a model app page setup on my blog and reviewed every submission. I got Diana’s submission and was interested. Not because of her amazing measurements (Almost 6’0 and DD breast) but her overall look! I loved her look and some of the sample photos she sent had her world class smirk.  The only real problem I had with her was she lived 45+ minutes away. Little did I know then how much of a problem that would be through out our knowing each other.

Diana was a little late, but I didn’t mind due to the drive and it being around dinner time that we shot. She matched the sample photos that she sent which is always a huge relief, and was ready to work. She had never modeled before so I was ready to work! Before all shoots, I like to sit down with the models and talk a bit face to face. I also like to verify the styles they’re open to shooting and make sure nothing has changed, +/- what they initially stated. Diana decided she didn’t want to do erotic nudes anymore, but ok with nude. Although it wasn’t a problem, it did take away some ideas I had for the session. Either way, we worked together without issue and I actually really enjoyed working with Diana!

Diana J and that smile!

She had a great time and we decided to do it once more! This time it was 4/22 so just a few weeks later. I had a new backdrop sponsor and wanted to shoot on their backdrop.

At this point, we had spoken a ton and she became my friend! I was always excited to talk to her and to hear from her and enjoyed shooting her. We had set up a shoot but she canceled it due to school. Understanding school comes first, I had no qualms about it. She updated her facebook to include images of her drinking and chilling at the pool. I won’t lie and say I wasn’t a bit miffed, but what can you do? Short term memory and move on.

In June of that year I put on an event; “Meeting of the Masters” and was looking for quality models. During this time frame, Diana had expressed in interest in getting to know my muse, Lauren Valenti as she loved her look and the energy she put out. Lauren wasn’t one to really meet people and hang out so after checking with Lauren and getting the “No thanks”, I didn’t say much to Diana. Knowing LV was going to be there and mostly cause she wanted to be part of the event, Diana asked and I accepted. She attended Meeting of the Masters and those there loved her as much as I did.

Because I was in my new studio, my studio partner and I held an open house event where we invited a bunch of models. Diana came as did Lauren and about 12 other models. Diana was able to really get to know Lauren and shoot:

After that, Diana was able to win Lauren over and they became friends. After that began my problems with Diana.

I was shooting Diana free. We all know that people very rarely respect free. She proved no different. By this time, Diana had moved from Colorado going home to finish school and make a life there. Crushed, I was saddened but again, understood! School is school and getting your life right is primary. She had promised that we would shoot at least once maybe three or four times before she left.

This was my fault as I set the precedence for what was to come next! I blew off the flaked session just to see an old friend. I am of the opinion that once she knew it was OK, it was OK to do other times and that’s exactly what happened! She had contacted me four times in 2011 to let me know she was back in CO visiting and that we MUST shoot. Dates set and flaked on each one. By the second one I started to play the game and not dedicate time to shooting. She didn’t let me know. Later that year I ended up moving to MN for a while. She contacted me to tell me that 2 hours South of where I was, she was shooting with another photographer that was fine if I wanted to tag along. After verifying several times she was making the drive from North Dakota, I made the drive down. It was awesome to finally see my friend:

The shoot was fun! I got to see Diana and meet two of her friends! They were both super fun and just as pretty, fun was had! I love to travel and wanted to go to North Dakota to see her so I scheduled a time. She flaked on that but let me know she was going to. I ended up moving to Colorado after and wanted to shoot one of the trio. I had asked the one and she was down. Diana found out and forbid me to shoot her saying her friend was a user. It was difficult for me to be used when I was setting everything up, but my allegiance to Diana made me not move forward with the shoot.

During this time, Diana had come to Colorado no less than five times telling me it was REQUIRED that we shoot. That she was going to make time. Once I had told her I wasn’t interested in shooting her cause she always flaked. She gave me to sad story and I caved. Scheduled time and she flaked. Not to be played anymore, I had decided I was done with her, shooting her. She gave me the sad story and promised to show up to shoot for real. I scheduled it and she showed up! 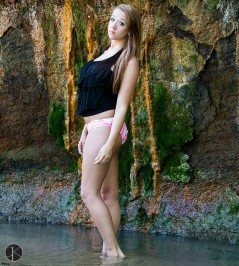 It was this shoot that everything changed from me. I only kept the above image from the shoot as I wasn’t into shooting her at all. The relationship was too damaged for me. But I am a sucker for a pretty face. She came back to CO and said she wanted to shoot. No, that we WERE going to shoot. I scheduled time for the shoot and she flaked. I found out she flaked as she uploaded a photo of her and Lauren sitting by the pool! She sent me a text saying sorry we missed each other but she’ll be back. I responded that I wasn’t interested in seeing her, sorry.

We spoke a few times after that with her telling me she was back in CO and wanting to shoot. I told her several times I had no more interest in shooting her. None at all. She didn’t understand and thought I was unfair. I explained she flaked no less than 10 times and I was over it. I had no more interest in shooting her or having much to do with her. This was difficult for me as I never had to end a professional relationship with a model before..at least one that I really liked.

Today her and I don’t talk. She does pop on my facebook page from time to time liking photo posts, but that’s as much of a relationship we have. I do miss talking to her, but know that it will all be for nothing.