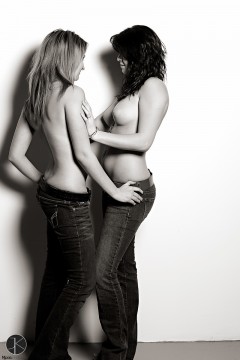 Around the same time I started shooting, Audrey Amanda Sue contacted me. She had seen some of the early work I did with Audrey and wanted to shoot. She and I discussed shooting and what styles. She told me emphatically that she would do nothing “too revealing” and stick with implied topless. That was fine with me as I was really starting to make my claim in Colorado and she would further help me make my mark. During our talks she told me she had a bff, Ashley that would be joining us. My thoughts: The more the merrier! And she sent me images of Ashley and that made it even better. At this time I was renting out a studio from a known persons and had a shoot with two separate models earlier in the day. Amanda and Ashley came to the studio pretty much on time but proved they weren’t exactly professional models. The first thing I noticed is they didn’t have any hair or makeup. They showed up plain faced and late. They were fun so that could make up for it. I also had the notion that I could fix it in photoshop. Ashley had a huge hickey on her boob from the night before’s adventure. Their clothes were wrinkled with no way to crease it out. At the time I took it as them not respecting me, today I realize I failed in stressing to them this was a professional shoot. I was tired and didn’t have much care for the shoot and my lazy lighting shows through in these images. Even for that time. During the shoot, Amanda Sue asked if her and Ashley could go topless since they thought it would be cool and something Audrey hadn’t done. I said sure and we shot:

For as much as it may seem I’m complaining, I actually had fun with the girls! They were laughing and joking and running in and out of the Artists area with new sets. Surprised they did topless, they were ever eager to see the photos and couldn’t wait to get them. When I got home I sent them the images and they both told me the loved them and wanted to shoot again. I of course agreed but had to focus on my upcoming workshop. They both said they wanted to be models at the workshop and what the hell, I agreed cause I dug them. Prior to the workshop and as they got out of the car I told them to NOT shoot topless! Do implied only. At this time I was big into hoarding models due to the mentality of most Colorado Photographers. They agreed and almost right away started shooting topless! Ashley did shoot some nudes as featured:

I had another shootout a lingerie/boudoir shootout and had Maeggy and a few other girls lined up. I got an email from Amanda to sign her and Ashley up so I did. I didn’t shoot that much at that shootout but here is one image of Amanda: 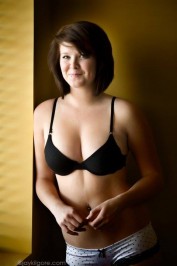 During that shootout, Maeggy was getting beyond frustrated cause Amanda, Ashley and another model, Pandora were doing this “Snap. Crackle. Pop.” thing. Maegan felt that was unprofessional of them and that they were being silly girls when modeling called for professionalism. I didn’t agree or disagree but as the event organizer I felt terrible she was unhappy. We moved forward and I got a text later that day that the three were stoked cause some of the photogs had tipped them and they spent all the money at Taco Johns. They ate like kings apparently.

I hadn’t spoken to them much after that. I moved on and had other models and faces at my event. I moved to MN for a short time and came back in July to visit. Ashley wanted to shoot again so I jumped at the chance. We hung out and shot and got caught up. It was fun seeing an old friend.

This was 2012 and I’ve not spoken to Ashley much since. We were recently in touch when she found out I was going to feature her on my Meet the Models, but not much after that. Amanda did contact me a few times expressing her interest in photography and which camera she should get back in 2010. Nothing from her since. I did notice after they were done with me, they did do a few shootouts with other photographers which is great! I don’t know if either is still modeling. Back in 2012 Ashley told me Amanda hadn’t done anything recently and she was working out for a fitness contest. That she no longer shot topless and even paid a photographer from my shoot to remove the photos.

I wish both nothing but success!