Kim Kardashian breaks internet didn’t happen then way she wanted, but it happened in other ways.

Unless you’ve been living under a rock, that has no internet and you don’t own a phablet, smart phone, tablet, laptop or any other device that attaches to the internet, you’ve seen the hoopla over Kim Kardashian and the Paper Magazine fight. I call it a fight because that’s all that seems to have happened. I had first heard of it the way most of the world had: “Kim Kardashian nude” and thought to myself; “Who cares? She has a sextape and Playboy pictorial, we’ve seen her wares, inside and out” but became intrigued because I saw a group of supposed professional boudoir photographers making comments that defied the term, professional. 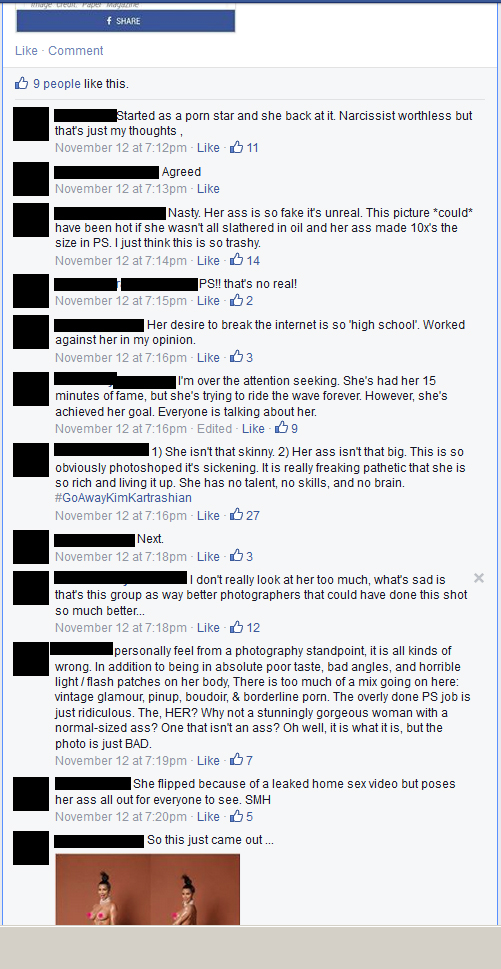 The comments continued on and on. The complete and total bashing of a female, a female that who knows, could hire one of these people one day! These supposed photographers kept it up for 130+ posts, bashing first Kim Kardashian, then the magazine and finally, the photographer. It became a silly circle of who can out comment the next with no one really winning. I ended up responding saying something along the lines of how sad it is that a group of “professionals” whose job it is to uplift women, are bashing one with out pause. That they should be ashamed of their selves for taking time out of their busy days and lives to bash another human being.

The magazine had a clear cut purpose: Get someone that’s going to draw attention to them. Have a photographer with in their means to shoot it and get the publicity from it. They hired the photographer and model. And they didn’t fail.

There is no such thing as negative publicity. Period. I am witness to this. I had many people spreading rumors about me and my business tripled because of it. The more someone gossips about Kim K, the more people look into it just to see what it is. In fact, I read an article a few months back that RayJ, the guy in the Kim K sextape offered to send Kayne West one month of the video earnings which was close to 40k. So for all those people talking trash about Kim Kardashian, you’re helping her stay on top!