I wish I were taller

I wish I were taller!

I come from a family of tall people; mom and dad excluded.  My oldest brother is 6’4″, next brother is 6’0″ and my baby brother is 6’3″. Me? I’m an amazing 5’6″.5 tall. “Almost a full grown man” according to my brothers. When I was young, I was one of the tallest kids in my class. When I was in the 5th grade, I was a foot taller than everyone standing proud at 5’0″. That year, everyone started to pass me and I knew I was going to grow. A year later I was half an inch taller but still shorter than everyone. I became drastic and tried the Bobby Brady method:

No, that didn’t work for me. Around that time, I began to get bullied cause I was short and had to fight (fine, get beat up a lot). I ended up hating the world because I couldn’t grow tall and blamed it on anyone who told me that I would grow, I just had to wait. I wanted to be tall and felt I was being punished by the Gods above for making me this short creature. It wasn’t until I got into martial arts that I learned to use my height to my advantage. Through martial arts, I learned to use my short limbs to do things that others couldn’t do. To get in and out of situations that other tall people couldn’t. Even as an adult in Brazilian Jiu Jitsu (Gracie Jiu Jitsu) my short limbs and no neck helps me avoid getting beaten up. This height lesson carried over into my photography world too. 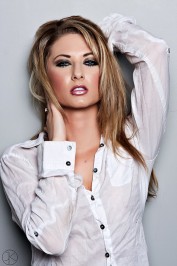 When I was in Colorado, I told people that Colorado just wasn’t a fashion state. That all these models were being scammed by the “fashion” photographers who sold titles vs quality work. I had one “photographer” who couldn’t make it in Cali, move to Colorado Springs and connect with me. He figured he could use the “black connection” to weasel his way in with me. I told him that CO wasn’t a fashion state. He said he would do fashion with Colorado’s non fashion industry models and “put Colorado on the map“. I explained that there’s a reason why CO wasn’t on the fashion map. He apparently became frustrated with me and when he applied to be a GMM staff photographer, he was denied. He blamed me and like all the others who come to realize Colorado will never be a fashion state, he continues to try and sell the dream to unsuspecting people.

I, like the weasel, hated that Colorado wouldn’t be a fashion state (I wish I were taller.) I listened to people like David Hickey and Art Ketchum when they told me that I could shoot fashion inspired themes, but I can’t shoot fashion in a state where fashion photography would never be a legitimate common place. I quickly gave up my dream of fashion photography and stuck to glamour photography. Now,I am in the glamour capital of the world and doing great things! I wish I were taller, but now I’m content and working where I need to be.